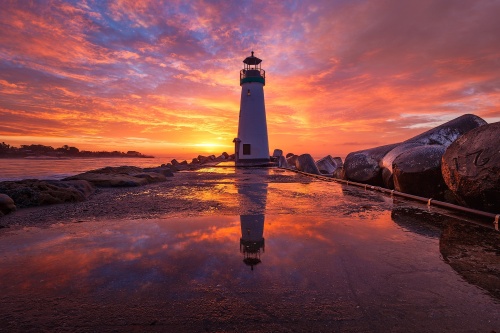 I love music – I really do. I think about it quite a lot, but when both my day and night jobs are music, sometimes I get so burned out that I can’t see the forest from the trees; or rather, the beauty in the sonic fabric from the succession of pitches in a unidirectional harmonic progression.

Sometimes, we play music; sometimes, we work music. When the grind of it starts to get to me, I often have this small voice in my mind that whispers: “I do love this, right? Right…?”

And I know that I do, but it’s almost like being lost at sea at times and I really need a lighthouse to bring me back. I call these songs/pieces/works lighthouse music because it helps bring my musical ear to shore. Here are a few of them:

I keep trying to write about this, but I just can’t. It speaks to me in a way that transcends line and harmony and craft. It’s one of the few pieces that I don’t analyze and I just let it wash over me (and I’ve studied/listened to a lot of Lauridsen). And this monstrously good performance sure doesn’t hurt either.

When I hear this, I sometimes tell myself: “This is what light sounds like.” It’s as though the light embraces me, it pulls me in and surrounds me. That’s how I feel when I hear Lux Aeterna.

Lord of the Rings (Annie Lennox) – Into the West

I never know what to write about this, other than it moves me every time I hear it. I always want to be technical about it – you know, “the lyrics,” “the tone,” “the orchestration…” But I don’t know, I feel things when I hear it and I feel like that needs to be enough.

As someone who has read all of Lord of the Rings, the Silmarillion, the Children of Húrin, the Unfinished Tales (you get the picture), the narrative runs pretty deep for me. There’s something about Into the West at that point in the story that speaks to me in a very authentic way–leaving friends behind, being unable to live in the world you used to, saying goodbye…

(And all the technical things too. It’s one heck of a performance).

For anyone who’s into music from video games, Final Fantasy VI is core repertoire and there have been countless orchestrations of it (even when an orchestra is entirely unnecessary for the musical goal, but that’s a whole other can of worms). As someone who knows this score inside and out, I’ve always been waiting for someone to take the musical material and work the heck out of it, which is what Born with the Gift of Magic is; in fact, the entire Final Symphony concert/album does it.

The orchestration, structure, and performance is amazing, but the thematic layering is a grad-school level assembly of the musical material that mirrors the narrative. It’s not just a medley, it’s the central conflict of the game and it’s all framed in the series most iconic sequence (the opera, if you’re wondering, which is also the unifying structure of the game). It’s genius… out of this world…  Ah! The craft!

My wife and I listened to this album quite a lot when our son was first born, sometimes at 4am while bouncing on an exercise ball, counting the seconds until he’d fall asleep again. I must have heard this song a hundred times, but I still love it, maybe because it takes me back to that crazy period…

Also, dodie/orla/lauren’s is really great too. There’s this really beautiful purity in their voices, the kind that only comes from young people who love to sing.

What are some of your lighthouse songs/pieces/works? Post in the comments or reach out on facebook/twitter! I’d love to hear from you.