As the Ink Dries on “Filum Vitae…”

I have this weird obsession with posterity – not just my own, but anyone’s.

I don’t want anything to be lost.

I wrote, directed and voice acted in a radio play called “The Constant” and just the other week, I found my notebook with its sketches from early 2008.  I completely forgot that I had it.  In its faded, smudged pages, I found the outline for each of the 10 episodes (which we shortened to seven), what was motivating the characters, their behaviour and how it would move the plot along… all of those things.   When I opened the notebook, it was so smeared that I could barely read it, it was the curse of my love of pencils.  Thankfully, I finished the work, typed up the scripts and put it out, but the sketches are what really interest me… especially notes in the margins, or notes to other actors.

That’s one thread of this, now allow me to begin another: 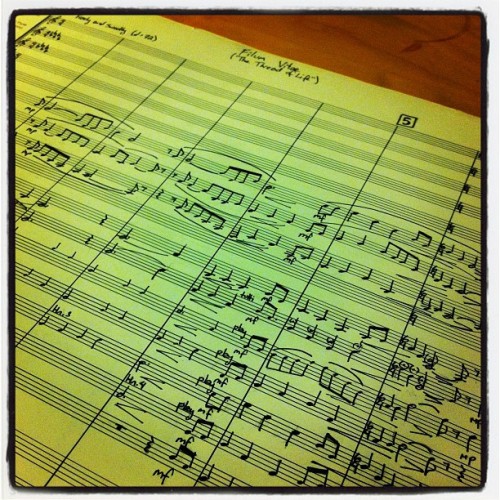 This past summer, I read Eric Whitacre‘s blog series “Advice to the Emerging Composer” and one thing that he talks about is the love of the “workshop.”  He means the pads of paper, the sound of the scratching lead as it transcribes his thoughts, the rubbing of the eraser and the shavings it leaves all over his desk, his pants and the floor.  You see, I love that too.  I love the reading the writer’s notes on the story, or the cartoons sprawled along the top of the page.

As I opened the notebook from “The Constant,” the notes were almost unreadable and, while I love getting everything down on paper before it goes into something special, there was nothing I could do.  See, those two threads came together 🙂

If I wanted my scores to survive, I have to do one of two things: Abandon the pencil-and-paper and do it all digitally OR ink the manuscript…

… I chose the latter.

The check-and-balance built into using pencil and paper is my favourite, because you play every line by hand at the piano, scribble it down and see if it works harmonically.  When you sequence it, you may be right on or maybe you won’t, but either way you know.  Also, inked scores are beautiful.

After two weeks, I finished! Here are some shots of the completed, handwritten score! 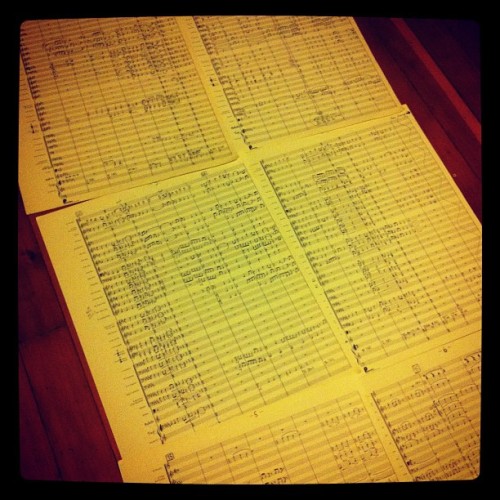 Oh yeah, and here’s how it sounds 🙂 (reasonably important!)

Thanks for reading!
Kenley

One Comment to “As the Ink Dries on “Filum Vitae…””