“Ending Theme” from Final Fantasy VI, by Nobuo Uematsu and released in 1994.

I know that I’ve posted this before, but this version is different and it celebrates the completion of a project that I’ve been working on for quuuuuuuuite some time.  But first the music…

I’ve heard just about every FF6 live performance/arrangement/orchestration on the web and I was SO happy to finally find this.  I’ve listened to the Ending Theme more times than I can count and I never ever thought that I’d find a live recording of it.  This comes from the “Final Fantasy VI: Littlejack Orchestra” concert at Yokohama Minato Mirai Hall in August 2009, according to the video uploader.

I found this version after months of research on the Japanese web. I had previouslyheard of a concert devoted exclusively to FINAL FANTASY VI: “LittlejackOrchestra” at Yokohama Minato Mirai Hall in August 2009. Being unable to attend,I had to find a single record, and my efforts were rewarded by putting the hand (or click …) on the video repeatedly. Far from perfect despite my edits, I grant you!

I think that he did an okay job editing but, to be honest, the recording isn’t the only thing far from perfect.  The performance is okay, but a lot of sections are out of balance and out of tune (especially in the upper woodwinds).  It’s still very impressive, don’t get me wrong, but if we’re going to do it, let’s really do it.  Symphonic Odysseys and Symphonic Fantasies come to mind… now those are performances!

To be fair, they are an amateur orchestra and they really played their heart out.  Their set was also incredibly long, which may have been to their detriment.  A solid article at “Original Sound Version” was written by someone who attended the show and is really worth the read.

Now, for the project.

Earlier this month, one of my students was talking about how much she loves the Harry Potter series.  She’s read all of the books a jillion times, had movie marathons, owns all of the wands, and more.  I must say, I was a bit jealous that she loved a universe that much and I wish that I did too.  Granted, I did at one point: The Final Fantasy VI universe.  I decided that it was time to revisit this place where my heart once belonged and see if there was still a place for it inside. 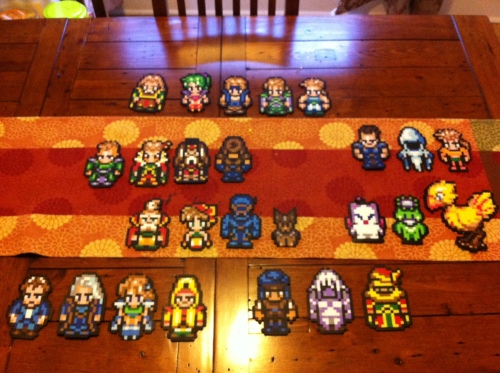 This one in particular pays tribute to a game that was such a huge part of my musical (and gaming) upbringing.  I decided to make the cast of the game in perler beads (beads on grid, iron them down into a pattern) and it really enabled me to rediscover what I love about the game.

My fiancee would ask about the dog, for example, I could explain that the dog was the companion of the detached and dark ninja, Shadow and the canine’s name was Interceptor.  He was the village dog in Thamasa, but had a particular affinity for Shadow back when he was a robber named Clyde.  You know, Thamasa is a pretty interesting village… (and then go on from there). 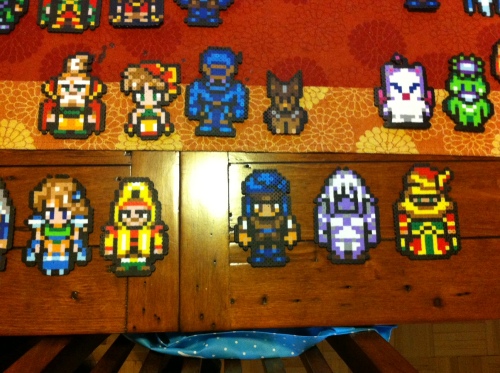 Another time, she asked about the man in the life jacket (Cid) and I recounted the Solitary Island part to her, especially with Celes and her complicated personal struggle.

Even now, the real beauty of the game is the complexity of story and backstory in each character.  I mean, the plot is interesting, but it really just enables the characters to deal with their struggles and overcome their own personal demons.  The game has a loose story, but the best narrative is the 16 parallel stories going on inside the characters.

I still love it and still think it’s beautiful 🙂